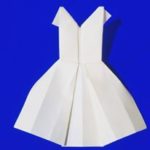 In the beginning, I want to define "Origami", which is made up of two smaller Japanese words: "oru" means to fold, and "kami", means paper. Japanese origami began sometime after Buddhist monks carried paper with them from China to Japan during the 6th century. The first Japanese origami is dated from this period and was used for religious ceremonial purposes only, due to the … END_OF_DOCUMENT_TOKEN_TO_BE_REPLACED