In this post, you will find amazing doctor quotes and sayings.

“Never go to a doctor whose office plants have died.” —Erma Bombeck

They may forget your name, but they will never forget how you made them feel.” —Unknown 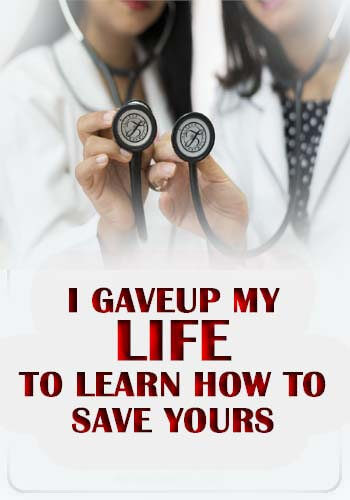 “I gave up my life to learn how to save yours.” —Unknown

“Each patient carries his own doctor inside him.” —Norman Cousins

“God heals and the doctor takes the fee.” —Benjamin Franklin

“Never ask a surgeon whether you need an operation.” —Gerhard Kocher

“The main drug in medicine is the doctor himself.” —Unknown

“If the doctor cures, the sun sees it; if he kills, the earth hides it.” —Scottish Proverb

“While the doctors consult, the patient dies.” —Proverb

“The best doctor is the one you run to and can’t find.” —Denis Diderot

“Cure the disease and kill the patient.” —Francis Bacon 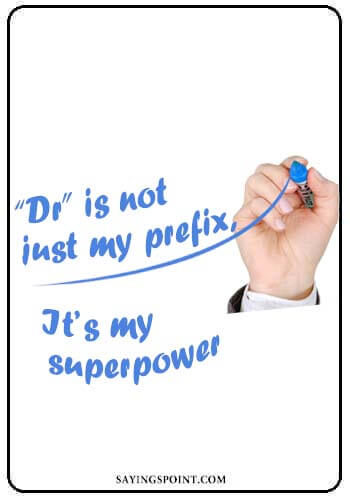 “Dr” is not just my prefix, It’s my superpower.” —Unknown

“Trust me I am a doctor.” —Unknown

“A hospital bed is a parked taxi with the meter running.” —Groucho Marx

We drink one another’s health and spoil our own.” —Jerome K. Jerome

“The operation was a success, but I’m afraid the doctor is dead.” —Steve Martin

“Doctors are great–as long as you don’t need them.” —Edward E. Rosenbaum

“It’s a beautiful thing when a career and a profession come together.” —Unknown

The best doctor knows the uselessness of many drugs.” —Benjamin Franklin

“The presence of the doctor is the beginning of the cure.” —Proverb

“A doctor and a boor know more than a doctor alone.” —German proverb 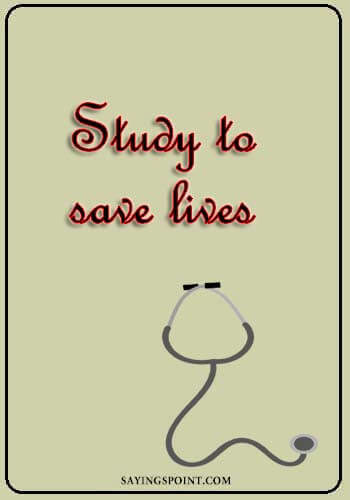 “Study to save lives.” —Unknown

“Only a life lived for others is a life worthwhile.” —Albert Einstein

“Suicide is cheating the doctor out of job.” —Josh Billing 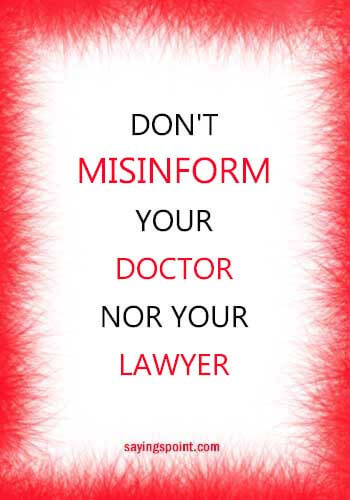 “Don’t misinform your doctor nor your lawyer.” —Unknown

“The secret of a long life is to never trust a doctor.” —Luise Rainer

“You cannot be a good doctor without pity.” —Axel Munthe

“Behind every great doctor is an even better nurse.” —Unknown

“Suffer now and live the rest of your life as a doctor.” —Unknown

“A doctor whose breath smells has no right to medical opinion.” —Martin H. Fischer 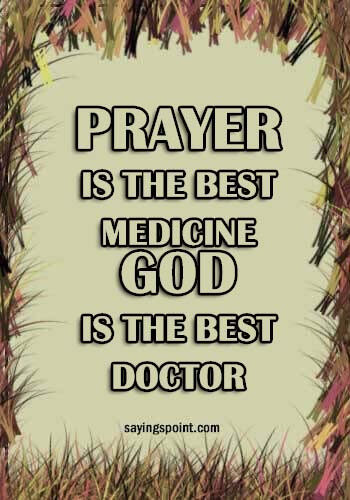 “A half doctor near is better than a whole one far away.” —German Proverb 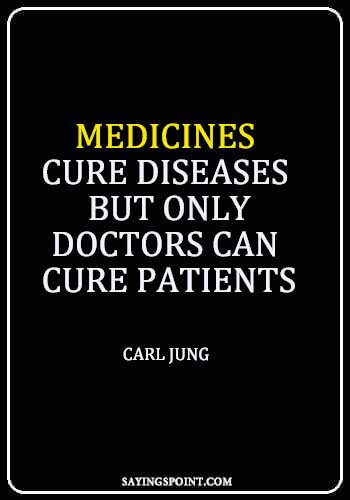 “One doctor makes work for another.” —English Proverb

“Beware of the young doctor and the old barber.” —American Proverb

“You can’t be a doctor if you don’t know the entire parts of the body.” —Bernie Mac 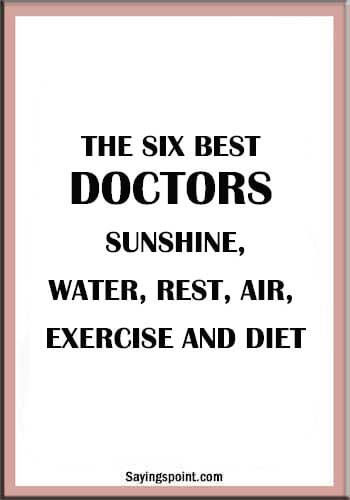 “Most doctors are prisoners of their education and shackled by their profession.” —Richard Diaz

“A surgeon is a doctor who can operate and who knows when not to.” —Unknown

“My doctor is wonderful. Once when I couldn’t afford an operation, he touched up the X-rays.” —Joey Bishop

“He wasn’t a medical doctor, just educated all the way up as far as you can get.” —Patricia C. Wrede 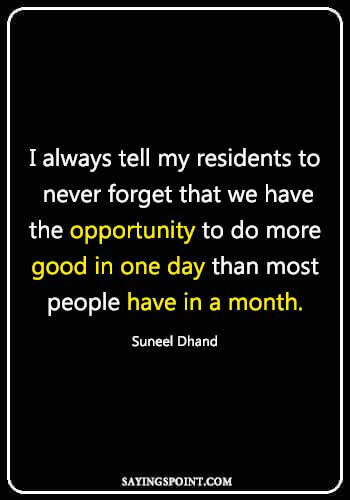 “I always tell my residents to never forget that we have the opportunity to do more good in one day than most people have in a month.” —Suneel Dhand

“Wherever the art of medicine is loved, there is also a love of humanity.” —Hippocrates 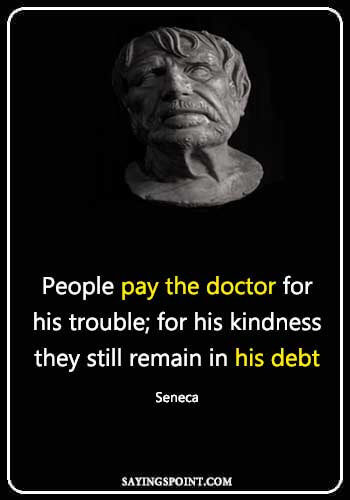 “People pay the doctor for his trouble; for his kindness they still remain in his debt.” —Seneca

“Disease increases in proportion to the increase in the number of doctors in a place.” —Mahatma Gandhi 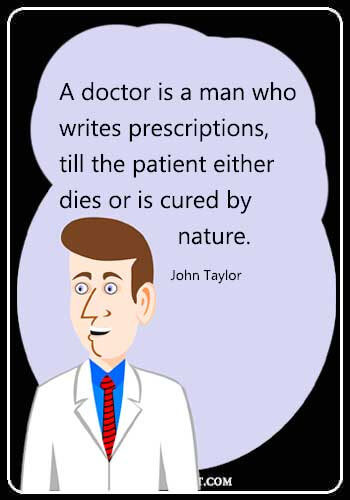 “A doctor is a man who writes prescriptions, till the patient either dies or is cured by nature.” —John Taylor

“I’m not a doctor. I just have a tremendous amount of common sense.” —Steve Harvey 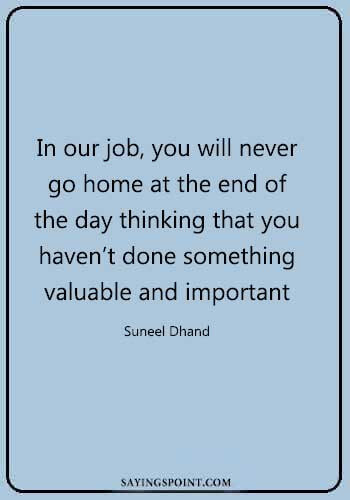 “In our job, you will never go home at the end of the day thinking that you haven’t done something valuable and important.” —Suneel Dhand

“I know of nothing more laughable than a doctor who does not die of old age.” —Voltaire

“I got the bill for my surgery. Now I know what those doctors were wearing masks for.” —James H. Boren

In nothing do men more nearly approach the gods than in giving health to men.” —Unknown

“You need a good bedside manner with doctors or you will get nowhere.” —William S. Burroughs

“An apple a day keeps the doctor away, But if the doctor is cute forget the fruit.” —Unknown

“A doctor will take care of the rich man; the poor man is cured with work.” —Polish proverb

“A psychiatrist asks a lot of expensive questions your wife asks for nothing.” —Joey Adams

“Doctors always think anybody doing something they aren’t a quack.” —Flannery O’Connor

“A priest sees people at their best, a lawyer at their worst, but a doctor sees them as they really are.” —English proverb

“The best doctor in the world is the veterinarian. He can’t ask his patients what is the matter – he’s got to just know.” —Will Rogers

“Doctors will have more lives to answer for in the next world than even we generals.” —Napoleon Bonaparte

“A doctor can bury his mistakes but an architect can only advise his clients to plant vines.” —Frank Lloyd Wright

“Doctors put a wall up between themselves and their patients; nurses broke it down.” —Jodi Picoult

“Doctors are just the same as lawyers; the only difference is that lawyers merely rob you, whereas doctors rob you and kill you too.” —Anton Chekhov

“One of the first duties of the physician is to educate the masses not to take medicine.” —William Osler

“When a doctor does go wrong he is the first of criminals. He has nerve and he has knowledge.” —Arthur Conan Doyle

“Wear the white coat with dignity and pride—it is an honor and privilege to get to serve the public as a physician.” —Bill H. Warren

You will find here top ten doctor sayings selected by our team.